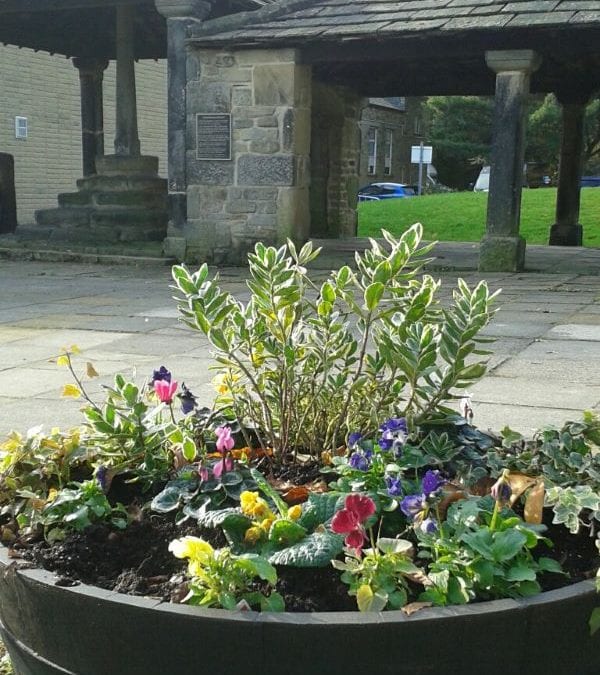 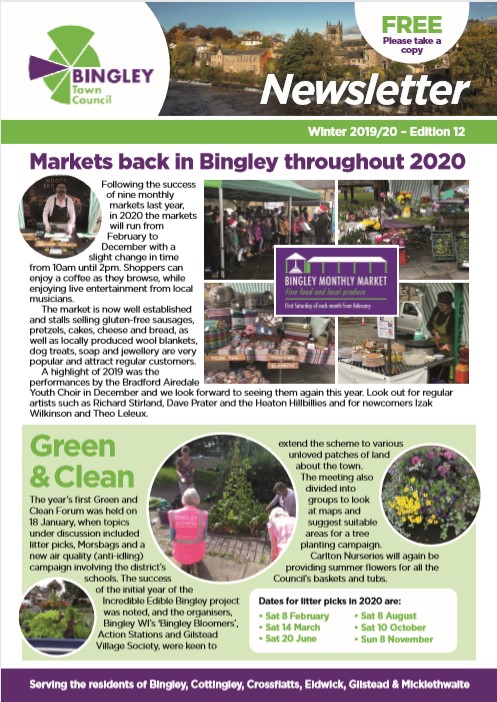 As ever there’s plenty going on in Bingley at this unusually wet time of the year. Some of our residents and businesses have sadly suffered from flooding and many of us are on constant weather watch. Looking ahead, there are signs of spring with daffodils and green shoots showing to cheer us up.

The second market of 2020 takes place on Saturday 7 March. This month, we will have a trader selling sustainably-produced cleaning products in refillable containers alongside our normal attractive range of.food and craft stalls.

March sees the start of our Climate Conversation, which aims to ask you how you would like to address the climate emergency and what actions should be prioritised. An initial event, constituting the second Green and Clean forum of the year, will be an opportunity to hear speakers on energy in the home and transport (tbc) and to review a draft questionnaire.

Look out for the first newsletter of the year appearing on your doormat. We hope it gives residents a clear picture of the work the council does.

And last but not least, Bradford Council recently announced that all the district’s twenty nine libraries will be retained, which is excellent news for Bingley’s well used and much visited library. The core services of the library will be retained, with additional services offered after consultation with stakeholders and users. Please do take time to fill in a very brief survey either online or in person in the library itself. 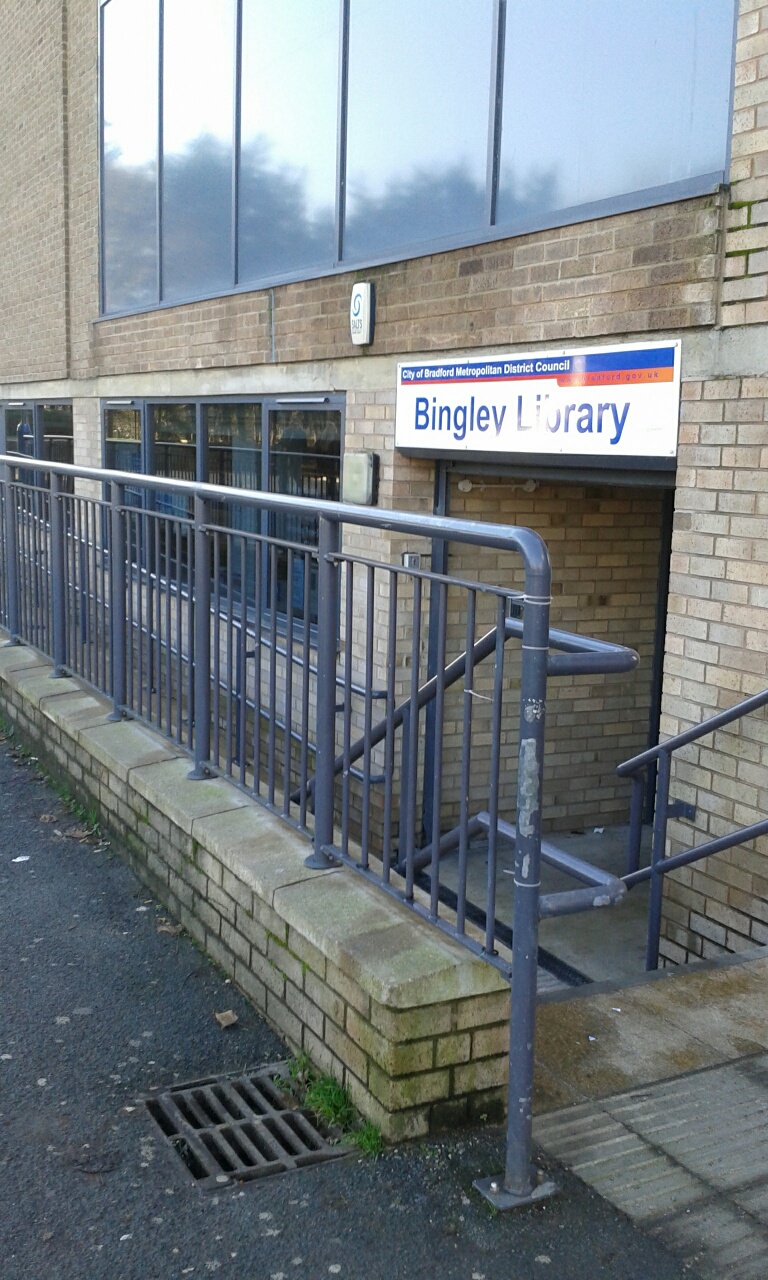 Councillors have recently held a meeting with Bradford Council officers regarding the future of Bingley Library. Library use nationally has fallen by 20% in the last 10 years, and, with budget cutbacks a likelihood, Bradford Council carried out a needs analysis and district-wide engagement exercise in 2019-2020. Thank you to everyone who took part.

Thanks to new proposed council investment and a push to secure more external funding, Bradford Council now confirm that there is no longer a need to meet the £1.05 million savings previously required in the libraries service, nor reduce provision while it develops plans for the future. All 29 library locations will keep their service and a budget of £700,000 is being made available from public health.

There are three kinds of library – Council, hybrid, or community-managed.  Bingley is a Council-managed Library. The intention is for the ‘core’ mainstream library offer to be maintained – this includes reading, borrowing, digital access, information and support for health and wellbeing. Each Council and community Library will also be assessed to devise a ‘tailored’ offer for that area. Local stakeholders and groups will be invited to contribute to that discussion. Wider funding opportunities are being explored.

Bradford Council is now undertaking a consultation on proposals for a new library ‘vision and ‘library services model’, which will recognise and enhance the wider impact libraries have in improving health outcomes, tackling poverty, addressing social isolation, assisting people back into employment and assisting with school readiness. Residents are asked to complete a short survey which is available online and in paper form at libraries. The deadline for submission is 15 March.

All relevant documents are available at https://bradford.moderngov.co.uk/mgConsultationDisplay.aspx?ID=228 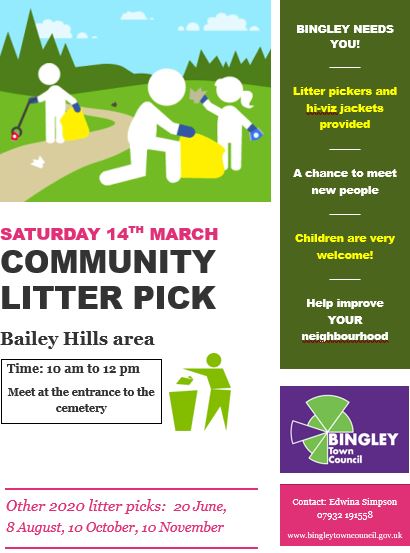 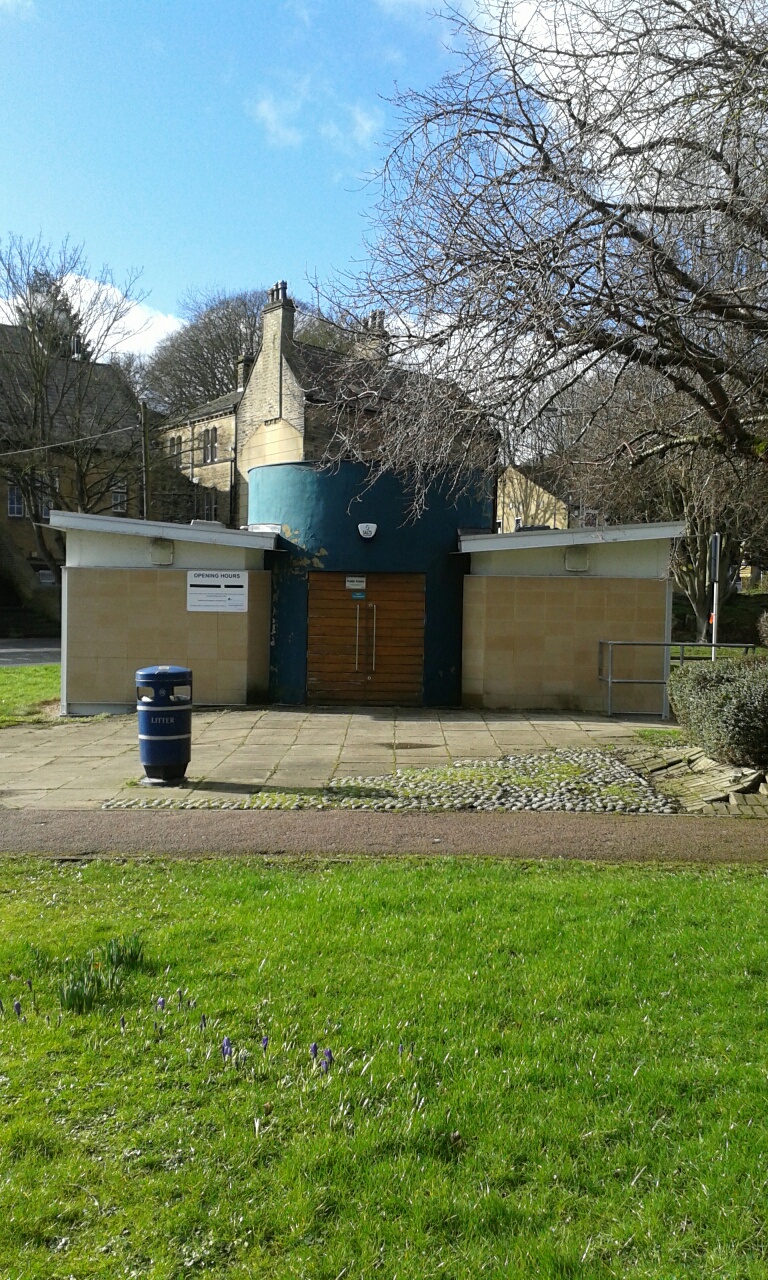 The council’s Climate Conversation will run from March to September and aims to find out how Bingley residents would like to address the climate emergency and what actions should be prioritised.

A questionnaire is being drafted and will be discussed at a meeting at Bingley Methodist Church on 21 March (see Green and Clean). The finalised version will be made available online and on paper, and the results will feed into a bigger public meeting with speakers on both national and regional climate emergency strategies and an opportunity to discuss ideas and proposals that can form the basis of an action plan.

The council has agreed amendments to its grant scheme for community groups so that, from April 2020, there will be a special focus on projects that address the climate emergency.  Suggestions are being gathered by the Climate Emergency Working Group for a tree planting campaign in conjunction with Bradford Council and the council is seeking information on the proposed expansion of Leeds Bradford Airport.

The next Green and Clean Forum will be held on Saturday 21 March in the Small Hall at Bingley Methodist Church, from 10 am to 12.30 pm. Speakers will include local architect Richard Dawson, who will speak on energy use in the home and it is hoped to have a further speaker on sustainable transport. This will frame the event as the start of Bingley Town Council’s Climate Conversation and the morning will include discussion of the draft questionnaire for residents. There will also be the usual discussions and information-sharing around plants, parks and local group activities. All welcome!

The Council has again agreed to purchase summer bedding plants through Bradford Council for distribution to village societies, gardening groups and Friends groups across the parish.

Thank you to all who turned out for our highly productive community litter pick on 8 February, when a shocking 72 sacks of rubbish were collected in the centre of Bingley. Please do come along for our next event on 14 March and keep the momentum going.

At its January meeting, the council agreed in principle to appoint Building Projects Group to undertake the project of converting the toilet block in Jubilee Gardens to provide offices for the council and new public toilets. Following some final adjustments to the specification, the full council meeting on 25 February agreed to appoint Building Projects Group at a contract price of £165,241.50 for the works subject to receiving final information in relation to Fair Tax.  A contract will be drawn up and put before the March meeting for signing, after which the project will be ready to start.

Despite much prompting, there has still not been a response from Bradford Council as to whether they will undertake the necessary electrical work at the pool to enable the installation of a Changing Places facility. The Council has allocated £12,000 for this piece of work.

Working with the police

Inspector Craig Stothers attended the full council meeting on 25 February to discuss action that West Yorkshire Police are taking to address renewed problems with anti-social behaviour by a small number of young people at the Five-Rise Shopping Centre on Main Street, Bingley.

The Town Council was concerned to learn, separately, that Bingley Library now has a security guard from 3 pm weekdays and Saturday afternoons, paid for from the Libraries budget.

Inspector Stothers confirmed that meetings were being held with shopping centre staff and secondary schools were being contacted. Warning letters would be issued to repeat offenders and anyone committing a criminal offence could expect to be dealt with appropriately.

The Town Council’s plan to enhance the town centre by repainting the street furniture black has now been approved by Bradford Council.  The costs will be covered by the Town Council but a decision is still awaited as to whether or not the work must be done by Bradford Council’s own contractor. A full specification will be produced and the project will involve pavement closures and diversions.

The Winter Newsletter 2019-20 has now been published and is being delivered door to door across the parish. You can also find it online here. We hope you’ll find it an interesting read. 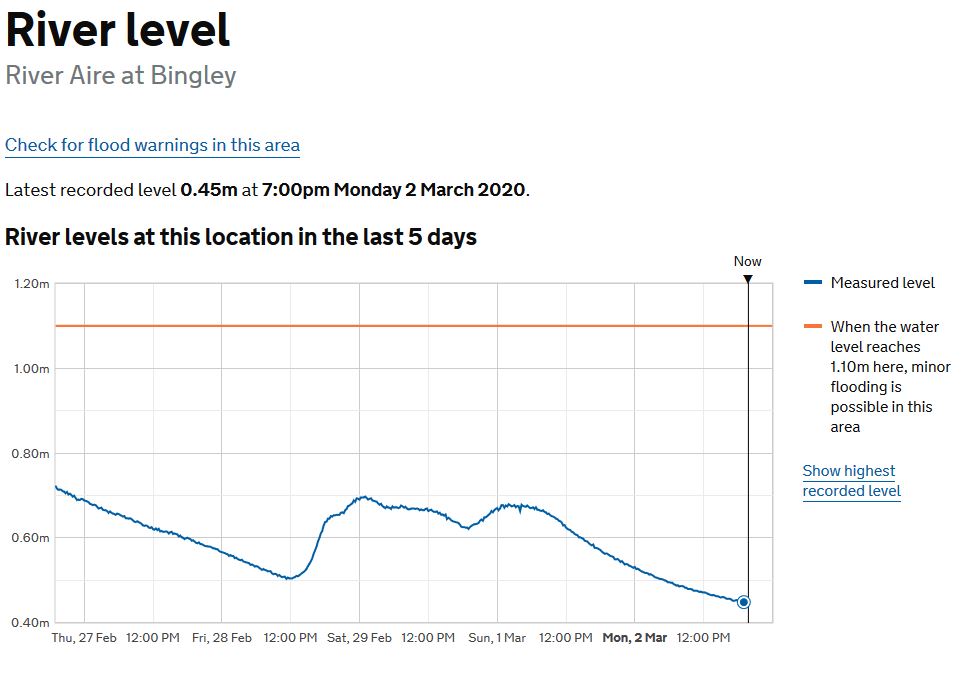 On Sunday 9 February, a team of approximately 60 volunteers, including some Bingley Town Councillors, worked magnificently to distribute sandbags and help residents to move furniture and possessions. Many of the problems identified by residents and businesses arose from blocked and overflowing drains and from run-off from the moors, rather than from the river in the first instance.

All affected properties that have been reported will be written to by Bradford Council in regard to available financial support.  Further advice may be given on request and will be prioritised according to risk. 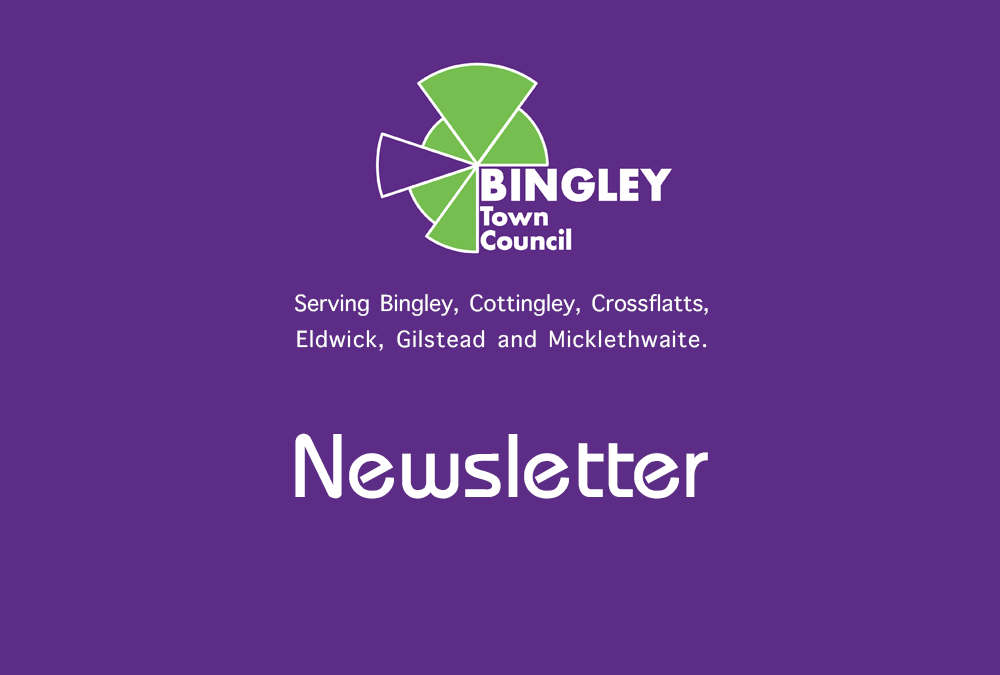 Dates for your diary

The next ordinary meeting of the Town Council is at 6.30 pm on:

You can see all our meeting dates in the calendar of the Events section of our website, and a full listing is available as a separate document, updated weekly, in the Documents section of the site.
Finally….if you’ve made it this far, please do share this newsletter with friends and family and encourage them to subscribe too.