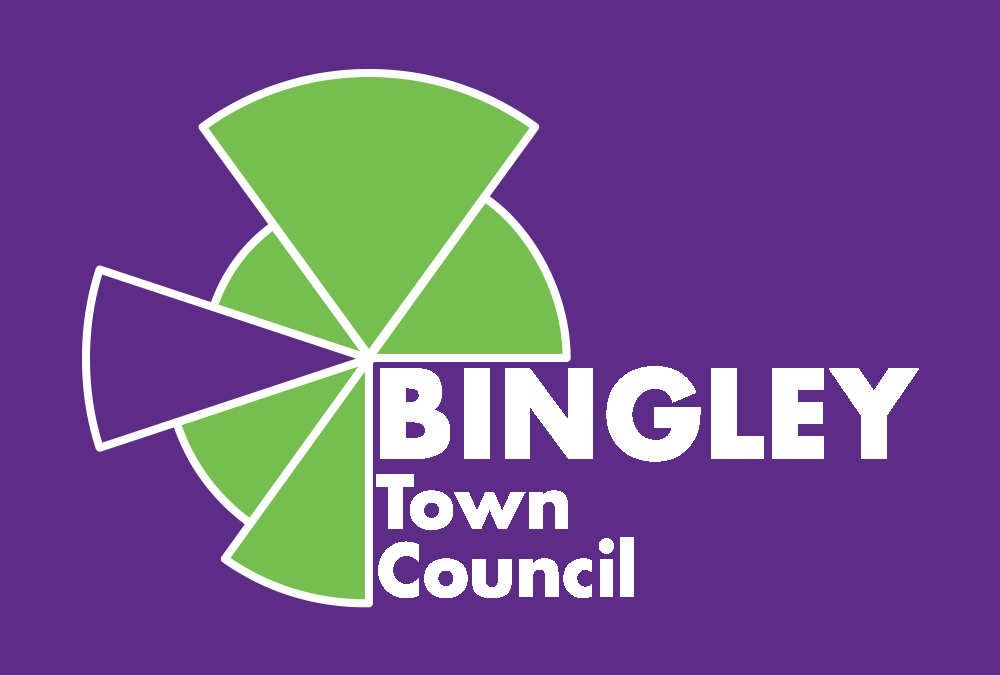 Bradford Council are currently consulting on the Draft Bradford District Local Plan. Residents are encouraged to take part in the consultation. Further information and supporting documents are available to be viewed here Local Plan Consultation link. The consultation is open for comment from Monday, 8 February until 11.59pm on Wednesday, 24 March 2021.
Bingley Town Council has submitted the following response to the consultation:

Bingley Town Council regrets the decision by Bradford Metropolitan District Council to make the Local Plan Consultation of such a short duration and its refusal to extend the deadline for comments. For such an important proposal, surely all residents should be given the chance to participate. To extend the deadline beyond the Local Elections in May and to take into account the gradual easing of lockdown measures would give those who do not or cannot use technology, to engage fully in the process. It seems to be discriminatory to take this route which will not allow many voters to express their views.

As Bradford Metropolitan District Council are aware, Bingley Town Council is in the process of developing its own Neighbourhood Plan and expects to hold its own Regulation 14 and Regulation 16 consultation and referendum before the end of 2021.

There are aspects of the proposed options for housing development which contradict the policies and objectives of the Bingley Town Council Draft Neighbourhood Plan, which has been publicly available and shared with Iain Cunningham, Senior Planning Officer at Bradford Metropolitan District Council A response from Iain Cunningham re the necessity or not of an S.E.A. is awaited.

Some sites which have been allocated for housing development lie within the Green Belt, namely:

The five purposes of the Green Belt are:

Bingley Town Council Draft Neighbourhood Plan – Chapter Natural Environment contains specific policies which seek to preserve and uphold National Green Belt policies and to preserve the environment for the benefit of all.

It is the view of the Town Council that for each of the sites above, the constraints and development considerations which are highlighted in the Bradford Local Plan far outweigh the benefits in terms of housing numbers. These proposed developments will have a severe impact on the natural environment and increase pressure on road networks and infrastructure such as housing, education and health.

In particular, the proposed development at C01/H Cottingley, has raised a high level of concern with residents. This development proposal was submitted on 22nd August 2019 and no decision was reached by the 22nd November 2019 deadline, despite over 220 objections being submitted. According to the drainage report SUDS (Sustainable Drainage Systems) are not viable for the March Cote Lane due to the geology / rock substrate. There will be an increased flood risk below the Marchcote Lane development, through extra pressure on Cottingley Beck, affecting the Lysander Way development, and potentially, Cottingley Town Hall, Nuffield Health Centre, Yorkshire Clinic and Dixon’s Academy.

Cottingley Village is designated as a Special Character Area in the Bingley Neighbourhood Plan. Policy BBE5. Cottingley Town Hall and Community Centre is a grade 2 listed building. The building and land was gifted to the village in the 1860s to be held in trust for future generations, and it is in regular use for community education and social activities. The beck runs directly behind the building and there are serious concerns the additional water flow will undermine the foundations and eventually make this grade 2 listed building unusable.

The impact of increased traffic on Cottingley and the difficulties of access to the proposed site, as well as the environmental impact are a grave cause for concern. It is a clear breach of Bradford Council’s previous LDP traffic safety assessments going back as far as the 1985 Lower Airedale Local Plan report that March Cote Lane and Lysander Way can not cope with the impact of extra road traffic. The whole area encompassing the B6146 Cottingley Moor Road, Lysander Way, B6269 Cottingley Cliffe Road, and the B6265 Bingley Road/A650 Bradford road from Wagon Lane to Saltaire are significant bottlenecks at peak times, owing to the traffic generated from Cottingley Primary School, Dixon’s Cottingley Academy and Beckfoot and Hazelbeck Schools. In December 2019 there were two fatalities near the junction with Grange Park Drive. A thorough traffic survey is essential across these areas, in non-pandemic circumstances and at peak times, to properly assess the density of traffic and the effect on the well-being and safety of pedestrians and residents. An assessment of air quality throughout the district is also required. It is astonishing that Bradford Metropolitan District Council is promoting a ‘Clean Air Zone’ which includes a corridor along Canal Road and into Shipley and Saltaire, yet proposes developments which will have a serious and lasting impact on the health of residents of Cottingley and Bingley.

The proposed two developments at SH/6 H Bankfield Farm and SH5/H Bingley Road contravene bullet point 2 above – ‘to prevent neighbouring towns merging.’  Within the Plan there is a section on ‘Key elements of local strategy’. These include; ‘Maintaining a Green Belt gap between Cottingley, Shipley and Bradford.’  This development will clearly fill the gap which demarcates the towns of Shipley and Bingley/Cottingley along Bingley Road. It is the last area of open space along the main Aire Valley trunk road. These sites are classed as Shipley, but in real terms will probably have the most impact on the residents and infrastructure of Cottingley/Cottingley Bar. In addition, both areas are in Flood zones 1 and 2, are in the WHS Buffer Zone, and the impact on the GI corridor, PROW and local habitat networks would be devastating.

The proposed developments at BI3/H Greenhill Barn Lady Lane and BI4/H Heights Lane (West side) BI8H Land west of Heights Lane are in contravention of GreenBelt policies 1,2 and 3 as stated above. Greenhill Barn is located in a moderate performing Green Belt parcel. The site makes a major contribution to the purposes of including land in the Green Belt, has major potential for sprawl and would have a major impact on openness. There are no features within the site which could be used to create a more logical or potentially stronger Green Belt boundary. The site is currently designated as Green Belt, and the site specific Green Belt Assessment indicates that it has a major potential impact. The potential impact on the setting of Grade II Listed Building is not taken into account and it is with the 2.5km buffer of the SPA/SAC.

The Heights Lane sites B14/H and BH18/H adjoin the Prince of Wales Registered Park. The loss of the greenfield site is likely to have a negative impact upon the local landscape and townscape, particularly the Prince of Wales Park (a Registered Park/Garden) with the potential to impact heavily on this setting. Both sites also fall within 2.5km of the South Pennine Moors SPA/ and are located in a moderate performing Green Belt parcel. The sites make a major contribution to the purposes of including land in the Green Belt. They have a major potential for sprawl and would have a moderate impact on openness. Like Greenhill Barn, the sites do not present an opportunity to create a stronger boundary than that which exists.

Heights Lane is a narrow country road with no footpaths, the sight lines at the junction with Otley Road are virtually non-existent, with no space for either footpaths or improved sight lines this proposal detracts from highways safety.

BMDC Local Plan Policy SP5 Green Belt states that: ‘All sites identified as being released from the Green Belt will be required to offset the impact of removing land from the Green Belt through compensatory improvements to the environmental quality and accessibility of remaining Green Belt land.’ Surely it is incumbent on Bradford Metropolitan District Council to define exactly how and when this should be achieved. The destruction of the Green Belt and requirement for mitigation cannot be left to vague promises without any firm resolution or requirement for action from developers.

In 2020 the partial review of the Core Strategy recommended a lower overall housing requirement for Bradford, including Bingley circa 800, Cottingley 0. Bingley Town Council Draft Neighbourhood Plan Housing Chapter P28-29 states; ‘the level of housing planned for the town was highlighted as a major concern of respondents to the consultation undertaken as part of the preparation of this Plan. It showed that residents were not opposed to further house building but were very concerned about the scale of new housing planned to take place, much of it on land presently in the Green Belt. In particular, that it would be ‘disproportionate and not sustainable. It was placing significant pressure on already stretched facilities such as health, education, green spaces and the road network. In addition, it was adding to the already high levels of commuting away from the Parish for jobs and services.’

In the Masterplan commissioned by Bingley Town Council from AECOM, BI/021 is identified as having potential for housing development, yet has been rejected as such in the Local Plan. This site is not in the Green Belt, yet could surely provide the number of houses currently projected for Greenhill Barn and the two sites at Heights Lane.

There are specific needs in Bingley for types and size of housing as well as for affordable and social housing and BMDC are urged to study the data contained in the Housing Needs assessment, to consult with Bingley Town Council and to put this data at the heart of the housing allocations for Bingley.

The encroachment on the Green Belt directly contradicts National and Local Green Belt policies and these proposals do not meet the exception criteria. Public Health England document ‘Improving Access to Greenspace’ 2020 states, ‘local authorities play a vital role in improving, maintaining and protecting existing Greenspace.’ The National Planning Policy Framework is clear that Greenbelt boundaries should only be altered where exceptional circumstances are fully justified and evidenced. When reviewing Greenbelt boundaries, ‘the need to promote sustainable patterns of development should be taken into account’ (Para. 138) Specific areas of concern include the adverse impact on habitat, woodland, water quality and flood risk, and the lack of accessibility to public transport.

Each of the proposed developments noted above will have an adverse impact, not only on the immediate area but on the whole of Bingley and Cottingley. It is essential that Bradford Metropolitan District Council meets its responsibilities to regenerate brownfield sites, before utilising Green Belt land.

This website uses cookies to improve your experience while you navigate through the website. Out of these, the cookies that are categorized as necessary are stored on your browser as they are essential for the working of basic functionalities of the website. We also use third-party cookies that help us analyze and understand how you use this website. These cookies will be stored in your browser only with your consent. You also have the option to opt-out of these cookies. But opting out of some of these cookies may affect your browsing experience.
Necessary Always Enabled

Any cookies that may not be particularly necessary for the website to function and is used specifically to collect user personal data via analytics, ads, other embedded contents are termed as non-necessary cookies. It is mandatory to procure user consent prior to running these cookies on your website.